At Long Last Our New Book Has Arrived! The Revolution: Captain, Pirate, Heroine 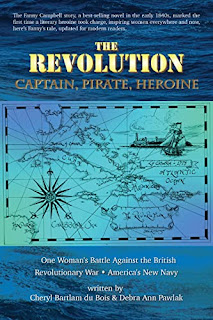 As the American Colonies prepare for a revolution, young Fanny Campbell, a fisherman's daughter from Lynn, Massachusetts, yearns for adventure.  When her intended ends up in La Cabana, an infamous Cuban prison, she will do anything to save him.  Fanny dons men's clothes and takes to the sea where she incites a crew to mutiny, battles hardened pirates, and clashes with the King's Royal Navy.

In the mid-1840s, a best-selling novel, 'Fanny Campbell, The Female Pirate Captain: A Tale of The Revolution' written by Maturin Murray Ballou took the country by storm. It sold more than 75,000 copies for a quarter each and marked the first time that a book centered on a literary heroine who took charge of her own life. Fanny Campbell inspired many girls of the Nineteenth Century including Michigan's own Sarah Emma Edmonds who, at the onset of the Civil War, disguised herself as a man and joined the Union Army. Likewise, Maud Buckley, the widow of a sea captain, was also stirred enough to get her own captain's license and sail the Great Lakes in the 1870s on her very own schooner, which she christened The Fanny Campbell.

Now it's time for a new generation to hear Fanny's story retold for the modern reader and be inspired by her bravado and daring. In our second book that we have coauthored, Cheryl Bartlam Du Bois and I have once again brought to life a heroine for the ages.

Fanny Campbell found herself in the midst of a revolution when the British Colonies in the new world revolted against the Crown. Witnessing such rebellious activity as the Boston Tea Party and living with severe restrictions due to the ban of all things English, she fell in love during perilous times. When her intended was captured and imprisoned in Cuba, she took to the high seas, disguised as a man, named Bartholomew Channing, and commandeered a British brig to rescue her lover. Fighting, Pirates, rough waters, and English enemies, they were reunited and together they commandeered two more British merchant vessels and sent a notorious Pirate ship full of buccaneers into eternity. The captured British ships and their spoils were ultimately given to General Washington and proved invaluable during the Revolutionary War.

Set amid actual events such as the Battle of Lexington and Concord with real heroes of the past like Moll Pitcher, the famed Psychic of Lynn, Fanny’s story unfolds within a colorful period of American history and is sure to please history buffs and armchair adventurers, as well as inspire a new generation of women to meet any challenge head on.

Get your copy now: