According to Chinese legend, tea drinking began over 5,000 years ago.  It is believed that Emperor Shen Nung sampled the very first cup in 2737 B.C.  It seems that the Emperor thought water should always be boiled before drinking.  Supposedly during one of his travels, he and his posse stopped to rest.  As a faithful servant boiled water underneath a tree, several leaves fell into the pot.  The water turned a dark rich color and so intrigued the Emperor that he tasted it.  With royal backing, tea became a popular drink throughout China.


Credited as refreshing AND healing, the dark colored brew was known as ch’a and in 780 A.D. Chinese author and Buddhist monk, Lu Yu penned a three-volume masterpiece all about it.  Titled Ch’a Ching, Yu’s words became the definitive source on all things tea.  Proud of their fellow monk, other Buddhist holy men took their tea to Japan.  The Japanese, however, didn’t develop a taste for the drink until 1191 A.D. when Zenn Buddhist leader Yeisai brought seeds from a tea plant to Japan.  He too wrote a book about tea.  A shrewd salesman as well as a writer, Yeisai even ‘cured’ an ailing Shogun with his tea and then presented the Japanese leader with a copy of his book.  With a royal seal of approval, the book and the brew became instant hits.
It took a while longer for the Oriental drink to reach Europe.  The Portuguese first opened a trade route to the Far East and transported tea back to Lisbon where it was distributed by Dutch ships to the Baltic countries, as well as France and the Netherlands.  As more tea was imported, the price lowered and tea went from being an elite drink to a common brew enjoyed by all.  The Dutch even brought tea to their recently established colony, New Amsterdam—now New York.  Unwittingly, the colonists set the stage for a revolution, but it wasn’t until tea reached England that all the trouble began.


Believe it or not, England was the last to sip tea.  It wasn’t until after 1650 that tea was served at coffee houses throughout Great Britain along with coffee and chocolate.  King Charles II imposed a tea tax in 1660 and several years later, the crown outlawed the imported drink, but at the same time gave Britain’s East India company their very own tea monopoly.  By 1720, tea became a staple in the New World, but the tax issue embittered many of the settlers.  As taxes increased, the outraged colonists refused to drink English tea.  The whole debacle resulted in The Boston Tea Party when rebels dumped a shipload of tea into Boston Harbor, which eventually led to the American Revolution.
Throughout the nineteenth century, tea remained a popular drink around the world.  In 1904, however, tea plantation owner Richard Blechynden gave the brew another twist.  That summer, he planned to pass out samples of his tea at the St. Louis World’s Fair, but the warm summer weather left him with few takers.  Desperate to drum up business, Blechynden cooled his tea with ice.  To everyone’s amazement, it was just as tasty cold.


Four years later, New York tea merchant Thomas Sullivan bagged tea leaves for the very first time.  The pre-measured sacks assured a good cup of tea with little effort.  The teabag soon became a staple in almost every home.  So the next time you sip some tea, you now know that you have something in common with both royalty and revolutionaries. 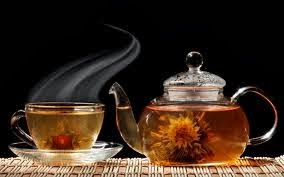 One-hundred and twelve years ago, an engineer for the Detroit Edison Company, built a horseless carriage and, in the driver’s seat, he won a car race—the only one he ever entered.


In front of thousands of onlookers, Henry Ford beat Alexander Winton at the Detroit Driving Club in Grosse Pointe, Michigan in the fall of 1901.  While Winton’s car overheated, Ford crossed the finish line averaging a heady 44 miles per hour.  He not only won the $1,000 purse, but also the interest of various investors who thought they should cash in on this mechanical marvel.  So with $28,000 in ready money, the Ford Motor Company was incorporated in 1903.  Ten workers earning $1.50 per day built the first two-cylinder Model A in what was once a Detroit wagon factory.  When Ford sold the vehicle to a local physician for $850, it became a hit.
But Henry Ford had an even better idea!


The four-cylinder Model B did not live up to the company’s expectations, but the Model C certainly did.  By 1907, the Ford Motor Company reaped a whopping $1,100 profit.  Ford continued identifying his automobiles alphabetically.  Some of the models were never mass produced, but considered only concept cars.  The Model N represented a total redesign.  Instead of a two-cylinder engine under the seat, the Model N boasted a four-cylinder engine under the hood.  By the time Ford was ready to build his most famous vehicle, he had exhausted the alphabet from A through S.  His next car represented the most modern automobile to date and he simply called it the Model T.
Ford formally introduced his Model T to the general public on October 1, 1908.  Known for its dependability, the car was soon nicknamed the ‘Tin Lizzie’ (‘Lizzie’ being a contemporary slang word used to describe a reliable servant).  The stripped down version minus a top, windshield and gas lamps went for $850.  After the first 500 cars were made, Ford enhanced the vehicle by adding a new starting crank.  In 1909, more options were featured:  robe rails, footrests, auto chimes and the tops (if you preferred one) could be ordered in either gray or black.


By 1910, Ford was producing 100 Model Ts per day.  The cars remained stationary while workers scurried all over the factory retrieving parts.  In order to meet the increasing demand, however, Ford had to improve production so he experimented with a crude assembly line at his new factory in Highland Park, Michigan.  Eventually production time was reduced to one hour and 33 minutes.  This in turn dropped the car’s price down to $360 making it available to middle class families.  In 1924, the price hit an all-time low of $290.  Over 15 million Tin Lizzies were sold in the United Sates alone with almost one million more going to Canada and another 250,000 shipped to England.  Up until 1927, the Model T represented one half of all cars built and as a result motoring evolved from an idle pastime of the rich into a way of life.
Will Rogers once commented:  “It will take a hundred years to tell whether, he {Ford} helped us or hurt us, but he certainly didn’t leave us where he found us.”  Well, 100 years have come and gone and it is clear that Henry Ford and his Model T revolutionized not only the way we work, but also the way we get there.  And life on the farm has never been the same. 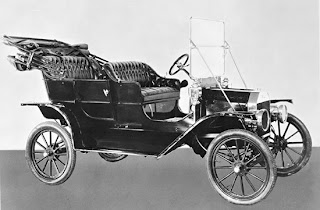