Sacagawea and The Corps of Discovery

She was only 16 and a brand new mother, when she and her husband joined The Corps of Discovery led by Captains Meriwether Lewis and William Clark.  The daughter of a Shoshone chief, she spoke no English, but became an integral part of the Lewis and Clark Expedition, as well as an American legend.


Envisioned by President Thomas Jefferson, The Corps was formed soon after the Louisiana Purchase.  Their purpose was to explore the newly acquired land and find an overland route to the Pacific Ocean.  The Corps assembled near St. Louis, Missouri in the fall of 1804 and the men traveled to present-day North Dakota where they set up camp for the winter.  It was there, they met the ill-mannered, middle-aged fur trader, Toussaint Charbonneau and his pregnant wife, Sacagawea, who had been kidnapped from her Shoshone tribe as a child.  Lewis and Clark hired Charbonneau as an interpreter to help talks with the Native Americans they were sure to encounter.  They believed his young wife might be an asset as well.  Clark wrote in his journal:  “A woman with a party of men is a token of peace.”  Sacagawea soon proved to be far more.
Eight weeks before The Corps was scheduled to continue their journey, Sacagawea gave birth to a son, Jean Baptiste, nicknamed Pomp.  Then on April 7, 1805, the group set out on their incredible journey.  Sacagawea gathered wild roots and berries for the men to eat.  She even saved critical supplies when a canoe tipped over—all while carrying her infant son on her back.  From that moment on, Lewis and Clark considered her an equal.


As The Corps traveled west, they came across Shoshone Chief Cameahwait and his people.  It was a critical moment for the men.  They needed horses in order to continue their journey.  Talks with the chief were going nowhere so the men sent for Sacagawea.  She was to translate the chief’s words for her husband who would then interpret the conversation in French to a member of The Corps.  This man would then give the English version to Lewis and Clark.
When Sacagawea caught sight of the chief, she grew overwhelmed and wept as she recognized her brother.  She not only got horses for The Corps, but also convinced her people to provide guides.  With the help of the Shoshone people, the expedition went on to reach the Pacific Ocean on November 8, 1805.  Sacagawea chose to remain with them and made the return trip to North Dakota nine months later.  While her husband received $500.33 for his services, she was left uncompensated.


We may not know exactly what happened to Sacagawea after the Lewis and Clark Expedition, but we do know that she played a vital role in their great success.  Each Corps member who kept a diary wrote of his admiration for her.  And what of her son, Pomp?  Stay tuned, you will find his story no less amazing. 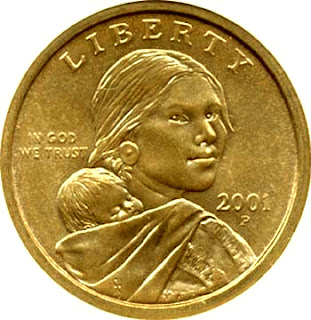 Still Crazy After All These Years!

I rarely blog about myself.  I’m afraid you all would find me very boring.  Today, however, I will make an exception because something extraordinary has happened.  For those of you who don’t know me personally, let me explain.


My mother died in 1957 when I was just a wee thing.  I have very vague memories of her and what little I know has been told to me by other people lucky enough to remember her.  My bereft father, who never expected to be widowed at such a young age, left me in the care of my maternal grandparents.  Our living arrangement may not have been conventional, but I grew up in a wonderful home filled with love.  The last time I saw my dad was fifty years ago—that’s right half a century.  As a result, it was also the last time I saw anyone from his side of the family.
Fast forward to 2010.  I was writing my book, Bringing Up Oscar, and I joined ancestry.com to aid in my research.  One Sunday afternoon, I decided to take a break from work and look up my dad’s family.  Lo and behold, I found them!  My dad and his brother, Bob, had both passed away, but I was able to contact my Uncle Bob’s eldest daughter, Janice, who not only remembered me, but welcomed me with an enthusiasm I never expected.  It seems my cousins had been looking for me for years, but I never knew it!


I have since met Janice and her sister, Kim.  Through them, I learned that my dad’s sister, Irene, and her children had relocated to the west coast.  My Aunt Irene (my dad’s only surviving sibling) is now in her eighties and I recently had the opportunity to see her again.  While traveling out west last month, I made arrangements to visit her daughter, my cousin Shelia.  I remember Shelia as the girl with beautiful long, dark curls that floated behind her as she played and her brother, Jerry, as the handsomest boy who ever donned a military uniform.
After a great lunch with Shelia and her husband, Dean, we visited the rehab facility where my Aunt Irene is recovering from a nasty fall.  Seeing them after all these years was nothing short of a miracle.  It was better than finding a pot of gold at the end of a rainbow!


As for my cousin, Jerry, he moved to Oregon so I haven’t seen him yet—but don’t you worry, Jerry—I’m coming for you next when you least expect it—unless, of course, you make it to Michigan before I get out there!! 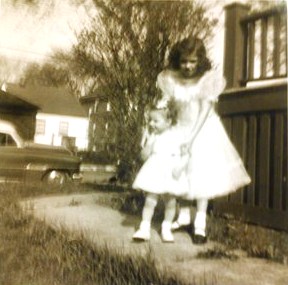 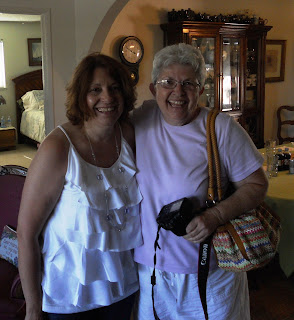 Me and Shelia - today 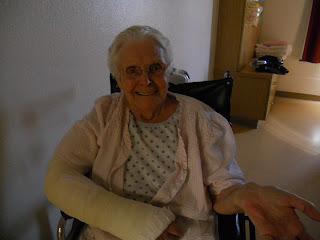