Ten Things Everyone Should Know About Halloween

Once again, it’s that time for ghastly ghosts, ghoulish goblins and glowing jack-o-lanterns so I have put together a list of important stuff everyone should know before they go trick-or-treating:

So now that you know the important stuff--go out and have a.....

On the grounds of his Menlo Park laboratory, inventor Thomas Alva Edison and his right-hand man, William Kennedy Laurie Dickson, designed America’s first motion picture studio.  While many believed that Dickson was really the brains behind the operation, Edison was still the boss after all and demanded his due credit.  They called their creation the Revolving Photograph Theater, or more formally, The Kinetograph Theater, when it opened in early 1893.  With a total cost of $637.67, the odd-looking building would not have won any architectural prize for beauty.  Wrapped in black tar paper on the outside, the austere structure’s interior was also painted black to ensure that filming resulted in the sharpest of images.  It was no wonder that Edison’s employees began calling the unwelcoming place ‘The Black Maria’—a contemporary term that referred to another inhospitable spot—a police paddy wagon.

Lacking indoor lighting, sunlight was a crucial element in those early days of filmmaking so the studio’s hinged roof opened via a series of ropes, pulleys and weights.  The building itself even sat on heavy rollers allowing it to rotate and follow the sun’s movement throughout the day.
All of the action occurred on a single stage and was captured by a Kinetograph (early camera) that rested on a nearby table. The table was mounted on tracks allowing limited camera movement.  Films were approximately 50 feet in length and ran for about one-half minute.  With Dickson acting as producer and often directing as well as manning the Kinetograph, subject matters included anything or anyone that might entice a spectator to take another look when visiting their favorite nickelodeon or peep show.
Sports were highly favored.  Even boxing champion James J. Corbett took on his challenger Peter Courtney inside The Black Maria.  Corbett knocked Courtney out cold right in front of the camera on September 7, 1894.  Agile gymnasts, flexible wrestlers and quick-footed fencers also performed at the studio.  Even strongman Eugene Sandow, often referred to as ‘The Modern Hercules’ and the ‘Father of Modern Bodybuilding’, flexed his considerable muscles on film.
Animals mimicking humans were another crowd pleaser.  Dancing bears, boxing cats and drum-beating elephants almost always brought spectators back for another peep.  Celebrated names also graced the laboratory grounds.  Wild West stars Buffalo Bill Cody and Annie Oakley both took aim and demonstrated their sharp-shooting skills complete with smoking guns.  And those that couldn’t shoot straight simply whirled their guns.  Rifle twirler Hadji Cheriff who was better known as Sheik Hadji Tahar, left the live stage long enough to perform part of his high-speed act at Edison’s studio. Exotic dancer Little Egypt, with her titillating hips, shimmied her way around the camera.  Even Ena Bertoldi, a female contortionist, happily twisted her limbs inside The Black Maria.
Despite the wide assortment of subjects, it was a simple sneeze and an ordinary kiss that many spectators liked to see again and again.  When it was originally filmed, Edison Kinetoscopic Record of a Sneeze (1894), the footage was only supposed to illustrate an article appearing in Harper’s Weekly.  The moving picture featured the mustachioed Fred Ott, Edison’s chief mechanic, as he inhaled a pinch of snuff, which resulted in a substantial sneeze.  As viewers experienced a good laugh, Edison had the film officially copyrighted.
While Fred Ott caused giggles, stage actors Mae Irwin and John C. Rice set off some moral outrage—but that didn’t hamper ticket sales.  Re-enacting a scene from their hit play The Widow Jones, the pair engaged in what seemed a tender conversation resulting in a kiss that lasted a scandalous 15 seconds.  The film, so brazenly called The Kiss (1896), was condemned for such a lewd display.  Many declared it unfit for any decent citizen to view.  Some even thought the police should be summoned.  Of course, the negative buzz didn’t stop the paying patrons who just couldn’t help themselves despite, or perhaps because of, the ballyhoo.
Eight years and hundreds of films later, America’s first movie studio had served its purpose.  Edison shut the place down opting for a modern filming facility in New York.  In 1903, he demolished the building, but the fledgling industry he launched there was about to soar. 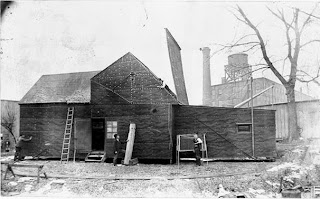