Elise Deroche was born on August 22, 1886 to a plumber and his wife in an average Parisian neighborhood.  Growing into a tall, shapely woman with long dark hair and expressive brown eyes, she chose life in the theater.  Success on the stage combined with her keen sense of style turned Elise into a popular figure.  In keeping with her image, she soon changed her name to Raymonde de Laroche and later added the royal title of ‘Baroness’.  Somehow, it had a more dramatic ring to it.


A flamboyant character, she claimed to be a lot of things including a painter, a sculptor, and an experienced balloonist.  Determined to add pilot to her list of careers, she called upon French aviator (and some believe her lover) Charles Voisin to teach her to fly.  In 1909, at the age of 23, de Laroche met Voisin at the Chậlons airfield where he and his brother, Gabriel, built and flew their own planes.
The Voisin was a one-seater forcing the pupil to sit alone in the plane while the trainer shouted orders from the ground.  De Laroche was told to drive the plane along the airfield.  When she reached the other side, a mechanic turned the plan around and she drove back to where she started.  She was not, under any circumstances, to lift off.  After her first taxi around the field, however, she was ready for take-off.  Against her instructor’s orders, she opened up the throttle, raced down the airstrip and rose about fifteen feet in the air.


Within a few months, de Laroche was more confident in her flying skills, but on January 4, 1910, she had a mishap.  Misjudging the height of several trees that stood on one end of the field, she caught the tail of her aeroplane in their branches.  The flying machine crash-landed.  Luckily, de Laroche suffered nothing more than a broken collarbone and a few nasty bruises.  The accident, however, did not deter her ambition to become the world’s first female licensed pilot.  It spurred her on even more and three months later, de Laroche duly impressed the French officials with her flying skills.  She was awarded pilot’s license #36—the first ever given to a woman.
As a barnstormer, she traveled the world.  In St. Petersburg, Russia, de Laroche caught the attention of Czar Nicholas II as she flew over a small airfield where smoking chimneys not only reduced visibility, but also caused unstable air currents.  After circling the field more than 300 feet above the ground, she simply turned off her engine and glided back down leaving the crowd and the Czar in awe.


From Russia, she traveled to Budapest where more chimneys wreaked even more havoc.  Here, however, de Laroche took first place.  Not because she won, but because no one else would try the 68 mile flight in the erratic atmosphere.  Next stop?  Rouen, Normandy where the air currents were worse.  Caught in a storm, she crash-landed into the fence that surrounded the field.  Thinking quickly, she kept the engine running so the aeroplane wouldn’t plunge into the spectators.  The Baroness got off lucky that time suffering only a concussion and another broken collarbone.
Later that summer, at Rheims in northern France, the Seconde Grande Semaine found de Laroche the only woman pitted against several men.  On the sixth day of the competition the Baroness’ luck ran out.  As she flew approximately 200 feet above the ground, her aeroplane crashed and she suffered a broken arm and two broken legs.  Undeterred, she was back in the pilot’s seat two years later.


This time, her eye was on a prize of 2,000 francs offered by Pierre Lafitte owner of the popular French women’s magazine, Fémina, and sponsor of the Coup de Fémina air competition for women.  The money would be awarded to the female pilot who flew the longest distance alone by December 31, 1912, but an automobile accident changed her plans.
She and Voisin were driving near Lyons on September 25th when they collided with another car.  Voison died at the scene and Raymonde suffered serious injuries.  Voisin’s death left the world of aviation in a tailspin and devastated the Baroness, but she was more determined than ever to return to the air. After surviving yet another auto accident, de Laroche took to the skies in 1913 hoping for a second chance at the coveted Coup de Fémina.  On November 29th, she flew a total of 200 miles in only four hours.  She could have flown farther, but a problematic gas line forced her down.  By year-end, no one single female flyer had done any better allowing the Baroness to claim the prize.


With the onset of World War I in 1914, civilian flying came to a halt, but as soon as the war ended in 1918, de Laroche was back in the pilot’s seat.  Much to her delight, she found the newer airplanes sleeker, faster and easier to handle.  With a new Caudron G3, the Baroness broke the women’s altitude record by climbing almost 13,000 feet at Issy-les-Moulineaux on June 7, 1919.  Three days later, American flyer Ruth Law bested that record by flying 14,000 feet in the air.  Not to be outdone, de Laroche reached an astonishing 15,000 feet on June 12th.
On July 18, 1919, the Baroness visited Le Crotoy airfield where she one of the test pilots offered her a ride in one of the newest flying machines.  Eyewitnesses said that as the plane came in for a landing, it swerved awkwardly and then went into a spinning dive, which sent it plummeting to earth.  The 33 year-old Baroness was dead at the scene and the pilot succumbed on his way to the hospital.  A statue honoring her stands at Le Bourget airport in Paris. 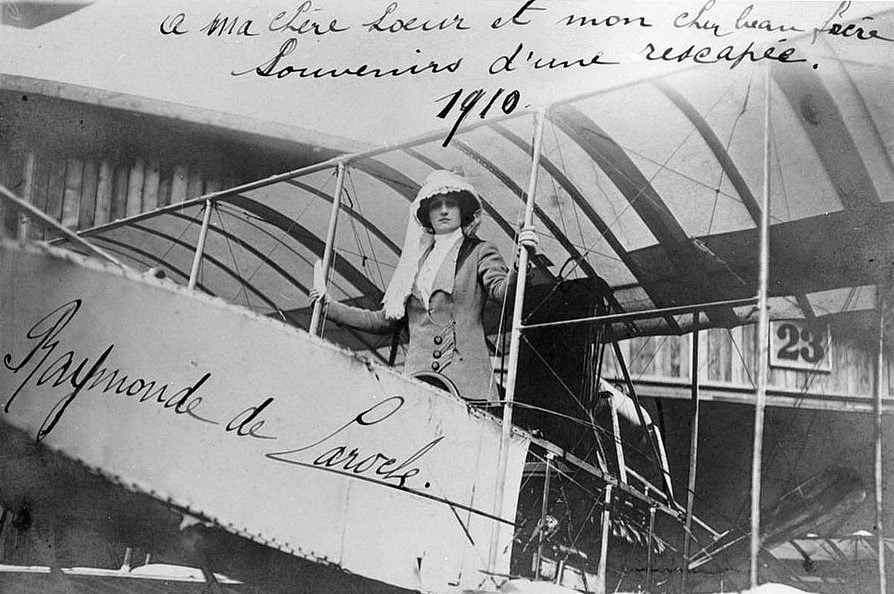 Consumed by music, a young John Philip Sousa played in the U.S, Marine Band by day and worked professional engagements by night.  In between, he studied and composed.  His first published work, Moonlight on the Potomac Waltzes (1872), was written for a friend trying to impress a girl.  The money was minimal, but having his work made public thrilled him.  Encouraged by his small success, he continued to write and publish his music.  In 1873, he composed a march called, Salutation, in honor of the new Marine Bandleader, Louis Schneider.  As the band began playing it for the very first time, Schneider discovered that a low-ranking bandsman had written the piece.  He stopped the music at once.


Understandably, Sousa soon chose to leave military life behind.  At the age of twenty, he was honorably discharged from the service and the Marine Corps band.  His days, however, were still filled with music.  Now an accomplished violinist, Sousa taught privately during the day and in the evenings played in two orchestras—one at Ford Theater and one at the Washington Theater Comique where he eventually became the conductor.


Sousa thrived on music working as an arranger, conductor, and composer establishing his professional brilliance and in 1880, the U.S. Marine Band contacted Sousa asking him to be their new leader when Louis Schneider resigned. Things got a little crazy as Sousa was unable to get out of his professional contracts in Philadelphia.  Everyone was happy, however, when his father, Antonio, finally accepted the position by proxy on his son’s behalf.  On October 1st, Sousa, now sporting his famous beard, became the fourteenth and first American born, leader of the U.S. Marine Band.


It was no easy job.  The forty member Marine Band’s repertoire left much to be desired.  Also known, as ‘The President’s Own Band’, they were the only group of musicians that played at the White House.  Their lackluster music, however, was outdated and the instruments themselves not up to Sousa’s high standards.  He demanded much from his men, strictly running rehearsals, which caused many of the less serious musicians to drop out.


With their numbers dwindling, Sousa personally recruited new band members to replace them.  He took in only those he knew and trusted.  In between his official duties, he even penned six lively new marches for the band to play.  Single-handedly, Sousa turned his Marines into sharp looking, professional sounding musicians.  Making their debut at a White House reception on New Year’s Day in 1881, the refurbished U.S. Marine Band led by John Philip Sousa had more than just a new leader.  They had a new sound and stepped into a new era.


Sousa himself has gone down in history as a remarkable American who wrote remarkable music.  Affectionately known as The March King, he will forever be linked with the rich sounds of America.  A true patriot who believed in his country, he gladly took on the role of musical ambassador around the globe bringing a taste of America wherever he went.  Respected worldwide for his talent and personal commitment to music, Sousa not only raised the standard of American music, but also truly became a superstar before the word even existed


Sousa left behind a musical legacy of 15 operettas, 136 marches, 11 suites, 2 descriptive pieces, 70 songs, 7 other vocal works, 11 waltzes, 13 dances, 14 humoresques, 28 fantasies, 6 incidental music to stage productions, 5 overtures, 2 concert pieces, 4 instrumental solos, 12 trumpet and drum pieces, and 322 arrangements and transcriptions.  He also left us his words with 7 books, 27 letters to the editor and 138 magazine and newspaper articles, many of which were written on topics other than music.


“If, out of the cadences of Time, I have evoked one note that clear and true, vibrates gratefully on the heartstrings of my public—I am well content.”  John Philip Sousa has done way more than that.  Even now, his music inspires us.  In it we still find comfort, courage and strength.  Thanks to him when we hear those high-stepping sounds we remember with pride and dignity exactly who we are. 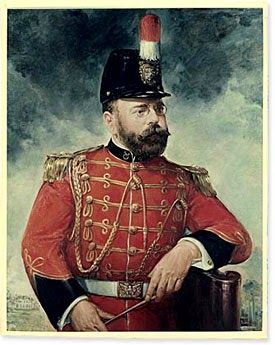