Soap operas may be on the decline today, but they have been around for years.  So what is the fascination?  Well, where else can we find brothers shooting long lost brothers they never knew they had, or sisters sleeping with the same schizophrenic man?  Only in the soaps do long dead folks return from the grave with amnesia after having plastic surgery.  Let’s not forget multiple personalities who share the same body, hating each other the whole time.  Or how about multiple people who share the same identity?  It all happens in the soaps.


Let’s take ‘Artie’ for example.  He died.  We all saw him fall off of a cliff after being shot in the stomach, but no body was ever found.  A few years later, a handsome stranger comes to town.  He calls himself ‘Jack’.  Jack has amnesia and can’t remember anything before his arrival.  After months of memory-struggling and hypnosis, he finally remembers that he is really Artie and a plastic surgeon has altered his entire body—even his height!
Artie remarries his wife who had long given him up for dead and becomes a model father to their children.  Another few years pass and the original Artie returns.  Now we have two and must wait in agonizing suspense for the DNA results.  The tests eventually reveal that the old Artie is the real Artie who had been held prisoner for the last seven years in a deserted monastery turned spy control center for the bad guys.


The new Artie is devastated and goes back to being Jack.  Once again, he has amnesia since he wasn’t really Artie like he thought.  Several more years pass and after much adventure and searching, Jack discovers he is really Freddie whom everyone thought died as a boy.  In reality, however, we learn that his mother faked his death and secretly sent him away.  Why, you ask?  Because that is how life goes in the soaps.
Soap characters have been married, divorced, shipwrecked, shot, short-changed, near death, stranded in the desert, lost in the jungle, held prisoner , wrongfully tried and imprisoned for murder, married again and divorced again.  Soap citizens also catch all kinds of maladies:  hysterical blindness, hysterical deafness, hysterical paralysis, all in one afternoon.


Every soap has a hero; he always carries a gun.  He’s tough.  We root for him as he takes care of all the bad guys and hope he gets the girl.  We feel sorry for him when he has to arrest his own mother for murder—except she’s not really his mother, but a woman who kidnapped him as a child and raised him as her own.  His real mother is a wealthy woman who decided to have a sex change is now our hero’s partner.
The heroine is everything to everybody.  She works around-the-clock, is active in community service and is always involved with at least one man.  How does she find time to do it all?  She doesn’t sleep!  She’s never dozed off once in the last decade or two!


The villain is another soap staple.  Rich and powerful, handsome and always impeccably dressed, he never looks scuzzy, but will use his own recently discovered children to get what he wants.  He owns all the big businesses in the area and donates large sums of money to local charities so people will admire him, but we know better.
Then there are the children.  Children of the soaps grow faster than the speed of light.  My son and a soap baby were born within a few weeks of each other.  While my boy prepared to enter high school, the soap baby already had two failed marriages, fathered several children from different women and was shot nine times in the head only to survive after lying in a coma for months.


Even though interest is dwindling in these daily episodic adventures, there are still loyal fans out there who grow emotional when their favorite characters are in jeopardy.  After all, we see those familiar faces in our living rooms every day. 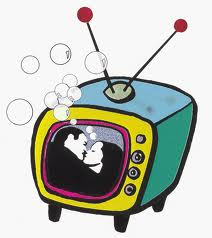