A Fall From Grace

After spending his youth traveling with vaudeville troupes and singing in California clubs, Roscoe Arbuckle became one of Mack Sennett’s Keystone Kops and a fabled Hollywood career began.  The rotund Arbuckle was surprisingly agile and adept at physical comedy despite his large size.  Sennett wisely paired him with the popular comedienne Mabel Normand.  Together, they took America by storm.  By the time Arbuckle left Sennett for Paramount Studios three years later, everyone’s favorite funny man was earning a weekly salary of $5,000.00 (almost $107,000 today).  Arbuckle soon became one of Hollywood’s biggest box office draws.  Then the unthinkable happened.   The public’s most loved film comedian, Roscoe ‘Fatty’ Arbuckle fell from grace.


In 1921, Arbuckle signed a new contract with Paramount that would earn him $1,000,000 annually.  To celebrate his good fortune, he traveled to San Francisco’s posh St. Francis Hotel for a Labor Day weekend of partying.  Actress Virginia Rappe was just one of his many guests, but when she turned up dead, Arbuckle was vilified as a sadistic rapist and murderer—despite the fact that she died in a hospital one week later, days after Arbuckle returned to L.A.
Suddenly, Arbuckle embodied everything that was wrong with Hollywood.  The press and the public condemned him.  Religious organizations and moralists demanded that the district attorney charge Arbuckle with murder.  They opted for manslaughter.  Arbuckle’s films were withdrawn from theaters across the nation and he became the first major movie star to be blacklisted.


His first two trials ended in hung juries requiring a third go-round.  When the third jury adjourned it took them five whole minutes to reach a unanimous decision of acquittal.  Most of that time was spent writing an apology to the defendant.  It read in part:


“Acquittal is not enough for Roscoe Arbuckle.  We feel that a great injustice has been done him.  We feel also that that it was only our plain duty to give him this exoneration under the evidence for there not the slightest proof adduced to connect him in any way with the commission of a crime….The happening at the hotel was an unfortunate affair for which Arbuckle, so the evidence shows, was in no way responsible….Roscoe Arbuckle is entirely innocent and free from all blame.” 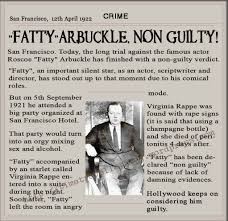 Arbuckle was now a free man, but life as he knew it was over.  His legal fees bankrupted him.  Former fans believed he was only freed due to a lack of evidence and his position in Hollywood.  Arbuckle remained a pariah for the rest of his years.  He died in his sleep on June 29, 1933—the cause of death sited as heart trouble, but those who knew him well believed his heart was simply broken.

As I sit here in my Midwest dwelling watching the snow pile up outside, I can’t help but think of one of my favorite vacation spots—Hawaii!


Separated from the rest of us by the vast Pacific, the 50th United State stands alone—literally.  But just what makes Hawaii so different?  It’s not the magnificent mountains or the tranquil trade winds or the tropical atmosphere.  Nah.  None of those.  It’s the Royalty.  Yes, that’s right—kings and queens.  Hawaii is the only state that was once ruled by a royal family starting with King Kamehameha the Great!
Born in 1758 on the Big Island, the infant king was originally named Paiea, meaning ‘Hard-Shelled Crab’.  He was the son of Keoua, a high chief, and Kekuiapoiwa, the daughter of King Alapai.  Legend tells us that he was born right after an appearance of Halley’s Comet.  This prompted the kahunas, or high priests, to predict that this child would grow to be the slayer of chiefs and sole ruler over the islands.  As a result, Alapai ordered the death of all male infants, but his grandson was secretly whisked away by the priests and quietly raised by a childless couple until he came of age.  Separated from his family, Paiea took the name Kamehameha, meaning, ‘The Lonely One’.


Eventually, Kamehameha came under the guidance of his uncle, Kalaniopu’u, who was Chief of the Big Island.  After his uncle’s death, he became second in command next to Kalaniopu’u’s son and heir, Kiwaloa.  When Kiwaloa was killed in a dispute, Kamehameha became King, but he didn’t stop there.  He continued attacking and conquering each of the islands one by one.  He even invaded Maui with cannons.  The battle that followed in Iao Valley is considered one of the bloodiest.  Fatalities were so high that the nearby waters were dammed up with bodies
By 1795, Kamehameha was the undisputed king of all the Hawaiian Islands except Kauai.  Determined to take over this last island, he launched war canoes from Oahu, but rough seas forced him back.  Later, he planned a raid from the Big Island, but ended up in Maui by mistake.  On his final attempt to take over, an unexpected outbreak of what was probably typhoid fever or cholera swept through his ranks killing many of his followers.  He then tried a new tactic—he offered his protection to the island and Kauai’s chief accepted.  Upon the chief’s death, several years later, Kauai finally became part of Kamehameha’s kingdom.


As king, Kamehameha had ultimate power, but to help him rule, he appointed a governor to each island.  He outlawed the common practice of human sacrifice and ensured that the local chiefs did not abuse the Hawaiian people.  It is said that King Kamehameha was a commanding figure—almost seven feet tall.  He reigned for 24 years until his death in 1819 at the age of 70.  Deeply mourned by his people, his remains were hidden in a secret cave somewhere on the Big Island.  The exact location is unknown and Hawaiian folklore says that the servants who buried him were killed to ensure the burial site would never be revealed.
Each year on June 11th, the state of Hawaii officially remembers by celebrating King Kamehameha Day.  A true warrior, he was not afraid to fight for what he believed in.  A wise and gentle ruler, he united the islands and for the first time brought peace and a sense of well-being to the Hawaiian people. 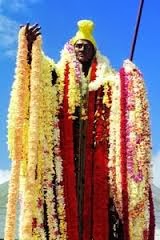