Ambitious producer/director, Thomas Ince, founded Culver City Studios. Ince, however, is not known for his movie mogul status.  He is best remembered for his untimely death and the cast of real life characters who witnessed the sordid events.

Hobnobbing with the rich and famous was always part of the Hollywood territory. So it seemed only natural for William Randolph Hearst to throw Ince a birthday bash on board his yacht, The Oneida.  The ship sailed from San Pedro, California heading for San Diego on Saturday, November 15, 1924. Among the guests were Hearst's mistress Marion Davies, silent film star Charlie Chaplin, columnist Louella Parsons and Hearst's film production manager, Dr. Daniel Carson Goodman, a licensed, but non-practicing, physician. Ironically, guest-of-honor Ince missed the boat.

Tied up with business in Los Angeles, Ince took a train to San Diego and joined the party Sunday morning. At dinner that night, the group celebrated Ince's 42nd birthday. Early Monday morning, he took a water taxi to shore accompanied by Dr. Goodman.  By Tuesday night, Ince was dead in his own home.

The official cause of death?  Heart failure. The Wednesday morning papers, however, declared: "Movie Producer Shot on Hearst Yacht!"—headlines that supposedly vanished in the evening edition. Hollywood legend says that William Randolph Hearst suspected Davies and Chaplin were lovers. Supposedly, he found the couple in a compromising clinch and went for his gun. Davies' screams awakened Ince who rushed to the scene and took the bullet meant for Chaplin.

A second version had Davies and Ince alone in the galley late Sunday night. Ince, suffering from ulcers, was looking for something to ease his upset stomach.  Hearst walked in, mistook Ince for Chaplin and shot him. A third version tells of a struggle over a gun between unidentified passengers. The gun accidentally fired and the bullet ripped through a plywood partition straight into Ince's room striking him.

The D.A. interviewed one witness—Dr. Goodman.  He explained that once ashore, he and Ince caught a train heading back to L.A. when Ince fell ill. The two men disembarked in Del Mar and checked into a hotel. Goodman called a doctor, as well as Ince’s wife. Not sure whether Ince was suffering from a heart attack or indigestion, Goodman claimed he left Del Mar before Mrs. Ince arrived. Case closed.

Rumors and suspicions continued. Chaplin denied being on board The Oneida, adamant that Ince died two weeks after the cruise. In reality, Ince was dead within two days after leaving the yacht with Chaplin attending the memorial services that Friday.

Marion Davies never acknowledged that Chaplin or Goodman attended Ince’s final birthday party.  Davies insisted that Ince’s wife called late Monday afternoon to inform her of Ince's death—but he didn't die until Tuesday.  Supposedly, Hearst, himself, provided the Widow Ince with a trust fund. In return, she refused an autopsy and ordered her husband's immediate cremation, then left for Europe.

Hearst apparently took care of Louella Parsons as well. Pre-cruise, Parsons was a New York movie columnist for one of Hearst's papers. Post-cruise, Hearst gave her a lifetime contract and expanded her syndication launching her infamous power in Hollywood.


So what really killed Thomas Ince? A sudden heart attack? A bout of indigestion? A misguided bullet? We'll never be sure and that’s what makes a legend—Hollywood-style. 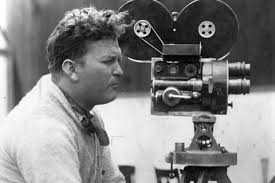 Sarah Winchester (nee Pardee) inherited a fortune from the Winchester Repeating Arms Company—famous for making the Winchester Rifle.  Despite her riches, she firmly believed that her good fortune came with a curse.

Born in 1839 in New Haven, Connecticut, Sarah’s parents saw to it that she had a good education.  She spoke several languages and was musically inclined.  In addition to her smarts, she was pretty and charming making her a favorite with the local boys.  One in particular, William Wirt Winchester, son of Oliver Winchester who owned the Winchester Repeating Arms Company, fell madly in love with her.

William married Sarah in 1862.  Four years later, they had a daughter, Annie who died as an infant.  Sarah never had another child and the happy-go-lucky girl she once was disappeared forever.  Her father-in-law passed away in 1880 and the following year tuberculosis claimed her husband leaving Sarah miserable despite the $20,000,000 she inherited along with half of the Winchester Company, which brought her one thousand dollars every single day.


Sarah sought comfort in psychics.  One soothsayer told her that the Winchesters were cursed by all of the souls who had been killed by their rifle.  These spirits demanded revenge.  According to the psychic, Sarah’s dead husband wanted her to move west and build a home in order to escape the family curse.  But there was a catch—once she started building, she must never, ever stop.  If she did, the evil spirits would claim her just as they had her baby, her father-in-law and her husband.
Sarah sold her home in Connecticut and moved to California where she found property in what is now San Jose.  Convinced that this was where her dead husband wanted her to be, she began building her home in 1884.  The construction continued non-stop for the next 36 years.


Sarah began with an unfinished farmhouse that stood on a little more than 160 acres.  She hired a team of carpenters to work around the clock.  Every night at 12:00, Sarah held a séance to summon only good spirits who provided the next day’s building plans.  The house grew daily as rooms were built around rooms; stairways leading to nowhere rose up; doors that opened to walls or nothing at all were installed.
By 1906, the house stood seven stories high.  Then on April 18th, a powerful earthquake struck San Francisco.  The top three floors of Sarah’s home collapsed trapping her in a bedroom.  After she was freed, Sarah believed that the entire incident was the spirits’ way of telling her that didn’t like her home improvements.  To appease them, Sarah boarded up 30 rooms in the front of the house.  She did not, however, stop building.  She installed secret rooms, trap doors, upside down stair posts and chimneys that didn’t work—all in an attempt to confuse the evil spirits that were after her.


Then on September 4, 1922, the hammering, sawing and construction halted when 83-year-old Sarah Winchester died in her sleep.  As they learned of her death, the workmen immediately quit whatever they were doing.  Some even left half-pounded nails in the walls.
Today, Sarah’s home, rumored to be haunted, is known as the Winchester Mystery House and has been designated a national historical place by the U.S. Government.  Visitors can tour the place and see for themselves the 160 rooms; 467 doorways, 950 doors, 47 fireplaces, 17 chimneys, 40 bedrooms, 40 stairways, 367 steps, three elevators, two basements and two ballrooms—only one of which is complete. 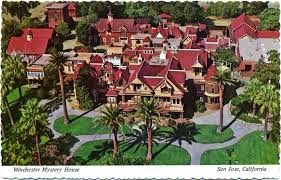