A Word About Popcorn

Popcorn is an American staple.  We eat it by the tubful--especially at the movies.  As a matter of fact, we consume about 16 billion quarts of popcorn annually—that’s around 52 quarts per person.  But what do we really know about this tasty treat?


Popcorn probably came from Mexico where 80,000-year-old corn pollen was discovered 200 feet below Mexico City.  Although it was grown in China, Sumatra and India, the oldest known popcorn was found in central New Mexico dating back more than 5,000 years.  Columbus discovered popcorn when he landed in the West Indies, and the Aztecs served it to Cortez when he marched into Mexico.
Popcorn was originally cooked by stirring the kernels in hot sand until they burst.  Decorative pots, used for popping corn, first appeared in Peru around 300 A.D.  With one handle and a hole in the top, these primitive poppers got the job done.  Native Americans used clay or metal pots and they offered deerskin bags filled with popped corn to the pilgrims at the very first Thanksgiving.  The colonists were so impressed that they ate it for breakfast with cream and sugar—a form of puffed cereal, if you will.


The popularity of popcorn rose in the 1890s as portable popcorn machines designed by Charlie Cretors became available.  Now vendors could push, or have their horses pull, these machines taking popcorn directly to the people.  Charlie Cretors’ family still makes most of the poppers used today in movie theaters and other places of entertainment.
Sales slumped briefly during the early 1920s when theater owners banned popcorn because of its loud crunch.  Once they realized that they were heading for financial disaster, they once again began selling the popular snack.  Sales boomed again when home poppers became available during the mid-1920s.  Then came World War II with sugar being used for the war effort.  With less candy made on the home front, Americans consumed three times more popcorn than usual.


During the 1950s, popcorn sales declined once more when television caused the movie going public to stay home.  This situation was only temporary, however.  Americans soon figured out that they could enjoy their favorite treat right in their own living room.  With microwavable popcorn produced in the 1980s, sales soared again and the crunchy treat has steadily stayed in the forefront of favorite snack foods to this day.
So how would you like your 52 quarts this year?  Buttered or plain? 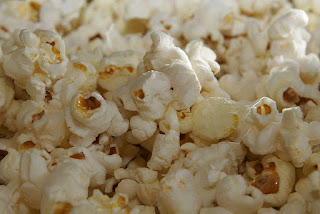 When William Randolph Hearst decided to build a vacation home high above San Simeon, he didn’t let a little thing like location get in his way.  Camp Hill, the site he picked, rose 1600 feet above sea level with five miles of winding cattle paths connecting it to the village below.  With the Pacific on one side and the Santa Lucia Mountains on the other, it was an isolated spot that wouldn’t take kindly to development.


It all began in 1865 when George Hearst bought the Piedra Blanca Ranch for $30,000.  The 40,000 acres were located 200 miles south of San Francisco near San Simeon Bay.  The ranch became a favorite campsite for George, his wife, Phoebe and their only child, William Randolph.  As a man, the younger Hearst took his own wife and sons to the ranch whenever he could.  There they stayed, with as many as 50 people, including guests and servants, in a complex of tents.  Despite the remote location, the Hearsts entertained with style throwing lavish dances and elaborate parties.
By the time, Hearst reached his mid-fifties, he decided it was time to get rid of the tents.  He envisioned a permanent vacation home high atop Camp Hill, now referred to as Enchanted Hill, overlooking the Pacific.  He first met with architect Julia Morgan n 1919.  Choosing a Mediterranean style, Hearst and Morgan made plans for the main house and three smaller guesthouses.  Before construction even started, however, Morgan had her work cut out for her.


Getting materials to San Simeon was next to impossible.  Forced to come by ship from San Francisco, a waterfront strike delayed deliveries.  Finally, in December 1919, the first shipment of lumber, nails and tools arrived on an old freighter.  Next, Morgan had to get the supplies and equipment up the hill.  She had the five-mile road rebuilt and found trucks powerful enough to haul everything to the top.  She also reconstructed the pier so larger ships, carrying more materials, could dock and unload in San Simeon Bay.
Morgan’s job wasn’t limited to the buildings.  The grounds were rugged and not in keeping with Hearst’s Mediterranean theme.  First, the rocky ridge had to be terraced with some particularly stubborn areas requiring dynamite.  Next, topsoil was hauled up the hill and the terraces leveled.  Water had to be piped down from natural springs in the surrounding mountains.  Once the ground was ready, trees, plants and shrubs had to be shipped to San Simeon, and then carted up the five-mile road before being planted in their designated spots.


By 1921, the Hearsts were staying in Casa del Mar, the largest of the guest houses.  It took another five years before they moved into the main house, Casa Grande, which was only partially complete.  A passionate collector of antiques, Hearst filled the place with historic items from all over the world.  He even bought European castles, as well as a complete Spanish monastery stone by stone across the Atlantic to incorporate into his estate.  His love of animals moved him to build a private zoo.  His menagerie included ostriches, llamas, giraffes, lions and an elephant named Marianne.  The descendents of the original zebras still roam the ranch today and are often spotted by motorists driving along the Pacific Coast Highway.
Although, Casa Grande was never totally finished, Hearst called it home, affectionately referring to it as ‘the ranch’.  In his later years, when his son, William Randolph Hearst, Jr., questioned why he built such a fabulous estate in such an odd spot, his father replied:  “I just wanted to.  Period.  I loved the place.” 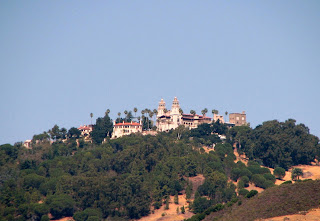