The Witch of November

Huron.  Ontario.  Michigan.  Superior.  Erie.  The Five Great Lakes.  Their glistening waters beckon boaters, fishermen and swimmers on those warm summer days when the sun is just right.  But don’t let them fool you. The shimmering Great Lakes harbor secrets—deadly secrets.  Over the past 300 years, they’ve claimed thousands of ships and countless more men—many consumed by the legendary Witch of November.


Collisions explosions, and fires have all caused shipwrecks on the Great Lakes, but it’s the sudden, lethal storms that are most feared.  Measured only by their wind speed, gales are declared when winds are clocked between 39 and 54 miles per hour (mph).  Gales with greater wind speeds are upgraded to storms—the highest rating given on the lakes.  Since 1835, 20 such storms, with winds blowing more than 73 mph, wreaked havoc across the lakes with the fiercest one gauged at 103 mph.  In the oceans, they would have been called hurricanes, but on the Great Lakes they are simply storms, no matter how deadly they turn.  Nineteen of these twenty tempests battered the lakes during November—the one month the sailors call cursed.  Here are a few reasons why:
November 9, 1861 – The Keystone State disappeared during a wicked winter storm that roared across Lake Huron.  Since she carried no lifeboats, all 33 people on board were lost.

November 16, 1883 – The Manistee encountered a blinding snowstorm on Lake Superior.  After several days of drifting in violent, freezing waters, a lifeboat carrying three of her crew washed ashore.  They described the high seas and strong southwest winds that tore their ship apart sweeping all of the other lifeboats away taking 23 lives with them.


November 30, 1908 –The Carl D. Bradley, a steel freighter, sank in Lake Michigan during a deadly storm when they ran into 70 mph winds, which barely gave the crew enough time to radio for help.  Help, however, did not come in time for the 33 men who perished.
November 28, 1966 – The Daniel J. Morrell disappeared while heading north on Lake Huron.  All but one man were lost.  The 26-year-old watchman who survived described how the ship broke in two clean across the middle during the violent storm.  The electrical cables snapped and with no emergency backup power, the crew could not signal for help.

November 10, 1975 – The Edmund Fitzgerald was the largest freighter ever lost on the Great Lakes.  She simply vanished in Lake Superior, 17 miles northwest of Whitefish Point, Michigan, during a deadly storm that clocked winds at about 100 mph.  Four days after she sank, sonar detected the wreck.  The ship had broken in two and her bow plummeted 535 feet to the bottom of the lake.  Her stern rolled over and came to rest upside down on top the ship’s midsection leaving no survivors.

On those warm summer days when the lakes want to play, it's hard to imagine the Witch of November and her wrath.  She shows no mercy and grants no favors taking what she wants with a vengeance.  He ruthless nature strikes fear in the bravest of sailors.  Superstition?  Maybe, but the fact remains that many a ship and he crew have lost when the Witch of November emerges. 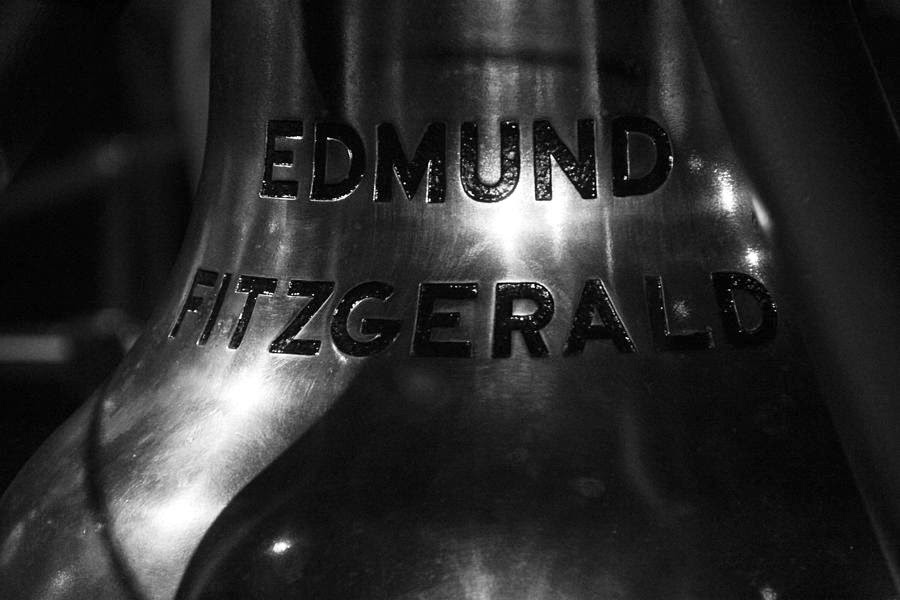 Well below the surface of Detroit, Michigan lies a hidden metropolis complete with man-made roadways, jumbo-size equipment and a unique history all its own.  Underneath the streets of the Motor City is a shimmering city of white—a city made entirely of salt. Detroit’s salt story began about 600 million years ago during the Paleozoic Era in a prehistoric bowl.  Back then, coral reefs separated the Michigan Basin (what we now know as the Lower Peninsula) from warm, shallow ocean waters.  For the next 400 million years or so, the basin sunk lower and lower and, on several different occasions, the ocean water seeped in.  Each time, the water evaporated leaving behind horizontal salt beds that stretched over 170,000 square miles—all the way to New York.


In 1895 salt was found under the streets of Detroit.  Eleven years later, the Detroit Salt and Manufacturing Company was ready to establish an actual mine within the city limit.  It took another four years to finish the first shaft, which measured 1,000 feet deep.  By 1914, the mine was producing 8,000 tons of the white stuff each month.
So just how did those salt miners get to work?  Down the single, narrow shaft, in a little elevator that carried only six men at a time in very close quarters.  Their tools and equipment also had to descend through that same shaft.  Between 1922 and 1925, the company built a second shaft even larger than the first, increasing efficiency.  This newer shaft was used to lift salt to the surface, while the older shaft continued carrying miners and their equipment.

Each piece of machinery (which would eventually include big rigs, mechanical shovels and electric trains) had to be taken apart, lowered down the shaft in pieces and then put back together in an underground workshop.  Some of the larger truck tires had to be deflated and bound before being taken down to the mine one at a time.  Today, however, the second shaft is primarily used for equipment, which is still disassembled at street level and then reassembled approximately 1,100 feet below the surface.

Just before World War II, Detroit once again broke new ground becoming one of the first major U.S. cities to salt their icy winter roads.  Other cities soon followed suit, which created a new demand for salt.  The Detroit Salt Mine expanded and, according to their website (http://detroitsalt.com/), they cover over 1,500 acres with more than 100 miles of roadway beneath the city streets.


The mine itself remains at a comfortable 60 degrees each and every day.  Miners use what is called ‘The Room and Pillar’ mining method.  This means about half of the salt that is mined is left behind in ‘pillar’ formation to hold up the top giving the mine a checkerboard appearance.  Salt rooms measuring 50-60 feet wide and 25 feet high are carved out with dynamite.  The explosions dislodge between 800 and 900 tons of salt in just a few seconds.  Miners then remove the loose pieces of salt with electric shovels and pile the salt chunks into large front-end loaders.
The salt is then taken by truck to a primary crusher where it is spun at a powerful speed causing it to break down into even smaller pieces—no more than eight inches in size.  From the crusher, the salt is placed on a conveyor belt.  It goes through another refinement process before being placed into ten-ton buckets and hoisted to the surface.  Once outside, the salt is either put into a railroad car for shipping or housed in storage for later use.


Salt, with its rich international history, is an old, old substance linked to life itself.  Geologists estimate that at least 55 counties in Michigan’s Lower Peninsula sit upon approximately 30,000 trillion tons of salt.  And that’s a whole lotta sodium and chloride! 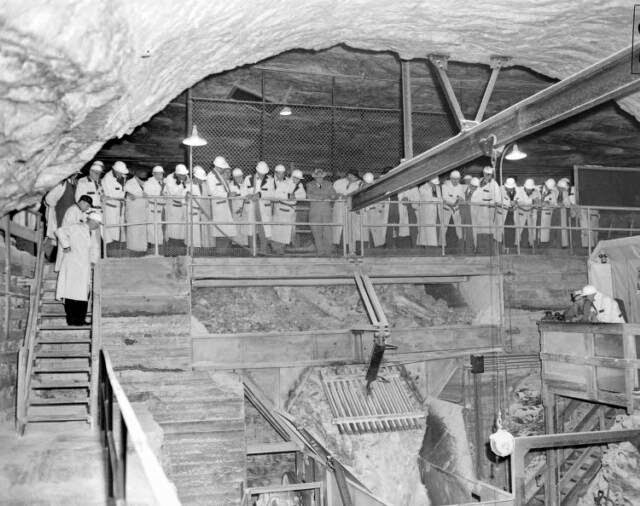