When Douglas Fairbanks met Mary Pickford for the first time, he swept her off her feet—literally.  By chance, one Sunday afternoon, actress Elsie Janis invited Doug and his then wife, Beth Sully, along with Mary and her spouse, Owen Moore, to visit her home in Tarrytown, New York.  As the five-some took a stroll around the estate, they reached a rather wide stream.  Elsie and Doug nimbly skipped over several stones to the other side, while Owen not-so-nimbly followed.  Afraid of falling, Beth turned back, but Mary in her high-heeled boots decided to try.  She found herself hesitating as she perched atop a log.  That’s when Doug took matters, and Mary, into his own hands.  He came to her rescue, picked her up and whisked her safely to the other side.


Despite their respective marriages, the couple’s mutual attraction grew.  Mary liked that Doug treated her as an equal while he was happy to find someone who understood the entertainment world he lived in.  When his mother died in 1916, his overwhelming grief brought them closer and Mary soon left New York for California.  The situation was touchy, however, since silent film stars were presented to the public as wholesome, morally upstanding citizens.  An adulterous affair could destroy their careers.  Rumors ran rampant as each worked toward dissolving their respective marriages.  Finally on March 28, 1920 with both of their divorces final, Doug and Mary wed in a secret ceremony.
For the next three days, Mary went to work with tape wrapped around her ring and the newlyweds spent their evenings in seclusion.  Fearing the worst, they finally gave in and announced to the world what they had done.  While the media tried to condemn them, their fans wouldn’t buy it.  In their eyes, Mary could do no wrong and if Doug made their sweetheart happy, than that was fine by them.  Triumphant, Doug and Mary embarked on a European honeymoon where cheering crowds greeted them wherever they went.  The Hollywood couple soon became America’s answer to royalty and Pickfair their castle.


Their grand estate evolved into a focal point for famous visitors such as Amelia Earhart, Albert Einstein and Sir Arthur Conan Doyle  Even kings and queens, dukes and duchesses, lords and ladies from Alba to Vienna deemed Pickfair a must-see when traveling to the States.  Parties at Pickfair were legendary, but even when social events were not planned, their dining table was always set for 15.  According to Mary, Doug had a habit of inviting ‘funny people’ to dinner.
Inseparable for the first eight years of their marriage, the couple eventually found their relationship strained as Doug’s wanderlust conflicted with Mary’s preference to stay home.  When Doug carried on with the much younger Lady Sylvia Ashley during a trip to London, Mary just couldn’t forgive him.  She filed for divorce.  Doug tried his best to change her mind, but as far as Mary was concerned, their life together was over.


Devastated, Doug gave up and traveled to New York with his only son, Doug, Jr.  They talked about making a movie together, but the elder Fairbanks impulsively sailed for Europe without saying a word.  Shortly after his departure, a telegram from Mary arrived at his hotel.  She was sorry and wanted him to come home.  Doug, Jr. frantically searched his father’s room for the name of the ship he was sailing on, but by the time he placed a call out to sea, Doug, Sr. wouldn’t listen.  He angrily accused his son of lying and always taking Mary’s side before he hung up.
Despite the fact that Doug and Mary each remarried, they continued spending time together until Doug’s death in 1939.  Just before her own death forty years later at the age of 87, Pickford (who remained living at Pickfair) asked her friend and reporter Adela Rogers St. Johns:  ”Will Douglas ever forgive me?”  She must have still felt guilty about their unhappy ending. 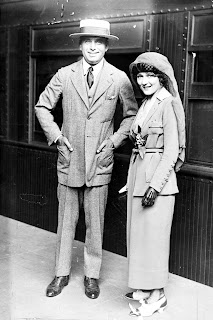 The Sinking of The Empress

The tragedy of the Empress of Ireland is mostly forgotten today, but just two years after the Titanic struck an iceberg and only one year before the Lusitania became a casualty of war, the waters of Canada’s St. Lawrence Seaway claimed her.  In the early hours of May 29, 1914, The Empress was broadsided by a Norwegian coal ship and within fourteen minutes, she plunged 170 feet below the surface taking more than 1,000 doomed men, women and children with her.


Capable of carrying 1,550 passengers, (300 in first class, 450 in second class and another 800 in steerage), the grand ship weighed 14,000 tons and could cruise up to 20 knots.  She made the 2,800-mile trip from Liverpool to Quebec in a remarkable six days—four on the formidable Atlantic and two in the relative safety of the St. Lawrence Seaway.  As the Empress sailed down that seaway for her 96th and final voyage, she carried sixteen steel lifeboats, 20 collapsibles and six canvas types.  All together, these rescue boats accommodated 500 more people than were actually on board that morning.  Since the Titanic disaster, mandatory fire, navigation and evacuation drills were routine.
After a brief rendezvous with a pilot cutter, the Empress picked up speed with Seaman John Carroll watching from the crow’s nest.  He spotted two tiny lights off to the east as a low bank of fog crept toward them from the shore.  The captain gave three short blasts from the Empress’ whistle hoping to make the other ship aware of their presence.  As the fog worsened, the captain ordered the engines turned off and then put the ship into full reverse hoping it would come to a complete stop.  The oncoming ship signaled back with a single long blast, but kept moving closer.


It was the worst possible situation.  The Storstad was a powerful Norwegian collier weighing 6,000 tons and hauling a full load of coal.  In the thickening fog, the Storstad’s confused first mate ordered his ship to turn what he thought was away from the Empress.  Instead they headed straight for her.  Built with a sharp vertical stern designed to cut through ice-filled waters, she hit the Empress below the water line.  With a gaping 25-foot hole, the damaged ship instantly took on water—60,000 gallons per second.
A hasty SOS was sent, but authorities were unable to determine the ship’s exact location.  Lifeboats were launched but within eight minutes, the Empress lost power and listed hard to the right.  Two minutes later, she rolled onto her right side crushing one of the lifeboats beneath her.  Fourteen minutes after the collision, she succumbed to the water completely disappearing below the surface.  While only 465 people survived, 1,012 perished including 134 children.


Although, the sinking of the Empress of Ireland was the worst maritime disaster in Canadian history, her story lacked the dramatic element of the Titanic.  She was not as glamorous nor was she on her maiden voyage.  Foundering in the St. Lawrence Seaway was not the same as sinking in the vast Atlantic Ocean.  Of course, timing was also a factor.  Just two months later, World War I erupted in Europe and modern warfare preoccupied the world.  The following year, when the Lusitania was torpedoed generating international headlines, the tragedy of the Empress faded into oblivion. 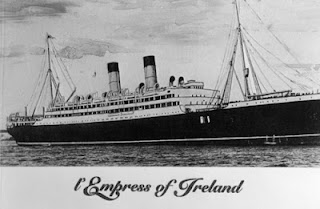