Gay Paree tumbled into the Twentieth Century with its colorful cabarets and their unique form of live entertainment.  These French cafés each showcased a glamorous chanteuse wearing dazzling costumes amid spectacular sets.  None was so popular as Mistinguett, who with her million dollar legs and risqué routines, captivated Paris.


Before she called herself Mistinguett, she was Jeanne Florentine Bourgeois, born on April 5, 1875 in Enghien, France to alcoholic parents.  Despite their own problems, the Bourgeois wanted their daughter to be a lady so they sent her to school and demanded she learn to play the violin.  Jeanne, however, had other ambitions.  She dropped out of school to sell carnations in front of a local casino and traded her violin lessons for singing lessons.  By the time she was 15, the young girl was a popular performer in the local cafés.  When a song-writing acquaintance made up the name Miss Tinguette, Jeanne took it as her own running it together and dropping the final ‘e’.  In 1895, Mistinguett debuted at the Casino de Paris and soon became the toast of Parisian nightlife.
Each evening at 9:30 sharp, she made her dramatic entrance in the spotlight.  Descending an enormous flight of stairs, wearing colorful feathers and sparkling jewelry, Mistinguett carefully navigated each step.  Cautiously balancing an enormous headdress while maneuvering an exaggerated train behind her, she reached the front of the stage and took charge.  Her numbers, ranging from soft ballads to bawdy dance routines, secured her place in the limelight.


By 1906, she teamed up with a much younger partner, 18-year-old Maurice Chevalier.  In their very first dance number, they rolled themselves up in a rug.  As the weeks wore on and they fine-tuned their steps, Chevalier worked up the nerve to kiss her while hidden in the rug.  Much to his delight, she liked it and once said:  “It was that damn carpet that started it all.”  The two had an on-again off -again relationship for decades.
Mistinguett lived large surrounding herself with luxury and royal lovers.  Aside from her Paris apartment, she owned magnificent homes in Normandy, Bougival and Antibes and her torrid love affairs were legendary.  She carried on with an Indian Prince, a Spanish king, as well as a future king of England.  She was also known to have turned down the King of Sweden and the German Crown Prince.  Unashamed of her influence over some of the most powerful men in the world, she never hesitated to call on any one of them for favors.


In addition to her colorful life, it’s believed she worked covertly for the French Military Intelligence during the First World War.  Her exact business with the French government remains shrouded in secrecy, but in 1918, the French military court asked her to testify against a German espionage ring that she helped uncover.  Due to the highly sensitive nature of the case, the records were permanently sealed and have never been made public.
Mistinguett played the Paris music halls for over 50 years.  She was, at one time, the highest paid female entertainer in the world.  In 1919, her legs were insured for 500,000 francs.  She was the first to sing ‘Mon Homme’ whose English version ‘My Man’ was later made famous by funny girl Fanny Brice.  She also popularized the elaborate showgirl costumes with their weighty headpieces that are still favored in Las Vegas.


Upon hearing of the the fatal stroke that claimed her life on January 5, 1956, Maurice Chevalier wrote:  “…You  can take your rest, Mist.  You who were the Parisienne personified, more than anyone ever was before, as much as anyone will ever be again.  You were the body and soul, the wit and chic of the feminine city.  They all adored you… and you will remain, for everyone, a shining light in the City of Lights.” 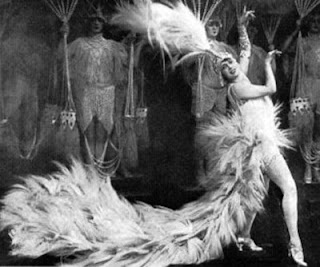 Posted by Debra Ann Pawlak at 4:48 PM No comments:

The Screen's Most Perfect Lover

The word ‘matinée’ is derived from the French word ‘matin’ meaning ‘morning’ and originally referred to a live theatrical performance, which took place during the day.  Prominent women who attended these plays on a regular basis picked up the moniker ‘matinée girls’.  You see, male escorts weren’t required before dark and the girls enjoyed their ‘ladies only’ jaunts.  Theater critics claimed that these ladies came to the theater just to gaze at their favorite leading men like the handsome Irish actor James O’Neill, a popular performer during the 1870s and 1880s, and father of playwright Eugene O’Neill.


O’Neill’s dashing roles, such as Edmond Dantés in The Count of Monte Cristo, which he played thousands of times, so endeared him to his female fans that a reporter once dubbed him ‘the patron saint of the matinée girls’.  Yet being idolized by these girls wasn’t exactly a compliment.  The actor’s talent wasn’t always key.  He just had to be two-parts handsome and one-part charming with a pinch of debonair mixed in.  With the evolution of movies, it was pretty much a given that matinée idols would soon be found on the silver screen.


Silent screen superstar, Wallace Reid set the bar for Hollywood’s matinée idols.  Born into the theater on April 15, 1891 in St. Louis, Missouri, his father was an actor and playwright while his mother was an actress and singer.  As an adult, Reid never intended to perform in front of a camera.  He had his heart set on being a cameraman.  His good looks, however, dictated otherwise.  By 1912, Reid was in Hollywood working at Universal Studios as a writer, cameraman and assistant director—until pretty Dorothy Davenport needed a leading man.  Reid fit the bill—both onscreen and off.  In between filming, two pictures each week, the pair were married on October 13, 1913.


Eventually, Reid went to work for D.W. Griffith who cast him as the shirtless blacksmith in ‘Birth of a Nation’ (1915).  The role was small, but seeing this tall, muscular man minus his shirt was all the public needed.  His career skyrocketed as spectators demanded more and Reid moved on to Paramount.  By 1918, Reid was at the top of his game.  He was the all-American boy, the nicest guy in pictures.  As the Jazz Age dawned, he met it head on playing the dancing male flapper, the young tycoon and the debonair playboy, but it was his films that featured the automobile that really thrilled the audience.  Cars were still a novelty in the early 1920s and Reid found his greatest success in movies that showcased racecars and speed.  This was a new kind of excitement making him as popular with the men as he was with the women.


By day, Reid worked hard—his schedule grueling.  Over seven years, he averaged a movie every seven weeks.  He made nine pictures in 1922 alone.  Hi roles were often physically demanding—especially the dangerous racing scenes he made so popular.  He bounced from film to film without so much as one day off.  By night, Reid played and drank hard—his home filled with laughter and good times.  With his ‘open door’ policy, he liked nothing better than to party until dawn.


The beginnings of Reid’s drug addiction are obscured now.  One account tells of the actor being in a train wreck while another story describes a head injury due to some sort of freak accident.  Either way, all accounts agree that he was given morphine to alleviate the pain and keep him working.  Before long, Reid was hooked and, in 1922, his wife was forced to commit him to a sanitarium.  With his body deteriorating from his addiction, ‘The Screen’s Most Perfect Lover’ succumbed to the flu on January 18, 1923 at the age of 31.
Posted by Debra Ann Pawlak at 12:15 PM 2 comments: