Herbert Arthur Chamberlain Hunter Blythe was born in India in 1849.  His father , a British citizen, worked in Fort Agra as a civil servant.  Growing up in the shadow of the Taj Mahal, Herbert later boasted that in deference to the local sacred cows, he was raised on goat’s milk.  That, he often told his friends, caused his children’s odd behavior.


As a young man, Herbert shocked his family when he traveled to London and took up boxing.  He was so good in the ring that in 1872, he won the Marquis of Queensberry Cup, which was awarded annually to the best amateur boxer in any class.  He also found work in the theater.  One evening his boxing prowess, along with his desire to act, joined forces when he came across the stage comedian, Charles Vandenhoff.  The entertainer was trying to protect his girlfriend from two attackers.  Herbert stepped in and saved the day with his fancy fisticuffs.  Vandenhoff was so grateful, he gave the young hero a job in his stock company.  To save the Blythes from any further embarrassment, Herbert then changed his name to Barrymore—Maurice Barrymore.  Legend has it that he saw the name on an old playbill hanging in the Haymarket Theater.  Wherever he found it, the extraordinary name he chose was destined for distinction.
Eventually, the handsome actor came to the United States where he found great success on the stages of New York.  He also found a best friend—actor John Drew.  Drew brought Barrymore to his mother’s house In Philadelphia.  The family matriarch, Louisa Lane Drew, a popular actress and manager of Philadelphia’s Arch Street Theater, disliked Barrymore immediately, but her daughter Georgiana was smitten.  After a quick courtship and against her mother’s wishes, the couple married on New Year’s Eve in 1876.  Their first child, Lionel, arrived on April 28, 1878.


Georgie soon found herself expecting again.  Unfazed by his personal responsibilities, Barrymore, left his pregnant wife and infant son in the care of his mother-in-law and went west with a traveling troupe.  Unfortunately, the actor crossed paths with an outlaw and was shot in Marshall, Texas where he underwent extensive surgery that saved his life.  Upon his return to Philadelphia, Georgie delivered a girl, Ethel, on August 15, 1879.
A recovered Barrymore continued working in the theater.  His good looks and quick wit earned him matinee idol status, but by the time their third child, John Sidney, was born on February 14, 1882, Barrymore was spending less and less time at home.  His drinking and philandering put a strain on the marriage.  Nonetheless, when Georgie died from tuberculosis in 1893, her death hit him hard—for a bit.  He soon found comfort in a much younger woman and married her without even telling his children.


Eventually, Barrymore’s hard living caught up with him.  Divorced from his second wife, he began acting irrationally.  Always a quick study, he experienced difficulty remembering things and then became delusional often falling victim to rages.  Doctors diagnosed him with end-stage syphilis for which there was no cure at the time.  The disease ravaged him both physically and mentally forcing his children to commit him to the Long Island Home in Amityville.  Originally given six months live, Barrymore lasted four years in the sanitarium.
Barrymore passed the time feverishly writing.  He filled page after page of foolscap paper explaining to anyone who would listen that he was penning a new play.  Upon closer inspection, his handwritten words revealed the phrase ‘It was a lovely day n June’ written over and over again.  Finally on March 25, 1905, Maurice Barrymore died and his children buried him in the family plot in Philadelphia. 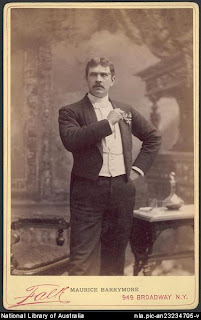 The Five Points Gang ran Brooklyn while the Northside Gang ruled Chicago.  Philadelphia claimed the Boiler Gang.  But the City of Detroit was home to the baddest boys of all—the Purple Gang.  Their supremacy over the Motor City began in 1918 when the State Prohibition Referendum (a forerunner of national Prohibition) banned alcohol in Michigan making Detroit the first major city to go dry.  While some folks saw this as a problem, the Purple Gang heard opportunity knocking.


Troublemakers from an early age, Abe, Ray, Joe and Izzy Bernstein formed a street gang who terrorized local merchants.  Supposedly one shopkeeper described the brothers as ‘tainted’ like bad meat turned purple.  With the state’s alcohol ban, the young Purples tried their hand at rum running.  Driving cars with false floorboards and second gas tanks, they headed south to Toledo, Ohio where legal booze was plentiful.  These sordid trips, however, were just practice runs for the real deal, which began in 1920 with the advent of national Prohibition.
American laws were meaningless in Canada, and with only the Detroit River separating Windsor from the Motor City, rum running came naturally for the Purples.  Not only did the Bernstein Brothers and their bad boys control liquor prices in Detroit, they became the major supplier of illegal booze to the New York and Chicago underworlds.  For the next five years, the Purple Gang ruled with a strong arm and deadly bullets.  Known for their violent methods, even Chicago-boss Al Capone didn’t dare cross them.  As much as he wanted to expand his territory and cash in on the liquid loot, he held back.  Capone knew better than to risk the rage of the Purples.


The Bernsteins wasted no time taking over most of Detroit’s blind pigs and cabarets.  They never thought twice about shooting up a joint if a proprietor refused to cooperate.  They even perfected a method of cutting liquor.  For every bottle of smuggled whiskey, they produced two and a half bottles of diluted brew.  By 1928, there were over 100 cutting plants operating in Detroit.  The illegal liquor trade became second only to the city’s auto industry.  While the Purples cashed in, their booming business also caused their downfall.
Stressed by the huge demand of their customers and the government’s crackdown on the city’s criminal element, the Purple Gang slowly unraveled.  In 1931, their infighting resulted in a triple killing known as the Collingwood Manor Massacre—one of Detroit’s worst gangland murders.  Three Purple leaders were convicted and sent to Marquette Prison in Michigan’s Upper Peninsula with life sentences.  Although they remained a relatively strong force in Detroit’s underworld until 1935, the national crime syndicate eventually absorbed the remnants of what was once the powerful Purples. 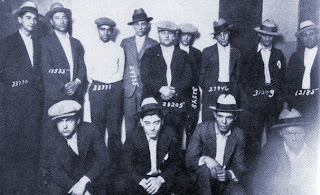 Posted by Debra Ann Pawlak at 3:07 PM No comments: